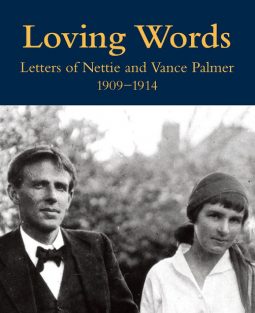 The passions of a century ago: a review of the love letters of Nettie and Vance Palmer

‘You queer human,’ Nettie Higgins wrote to her fiancée, Vance Palmer, in 1913, ‘you’ve got further down into my existence than I realise. The deeper I probe, the more of you I find. It’s terrifying, sometimes’ (376). In this new collection of their letters, we follow these two Australian writers a century ago as they fall in love while on a passionate quest for meaning in literature, politics, and domestic life, outside the evangelical Christianity they were both born into. Nettie (1885-1964) and Vance (1885-1959) Palmer were to dedicate their lives to the development of a distinctive Australian literature. Both were critics; Nettie was also a poet, and Vance is best remembered as a novelist, but they wrote widely across many genres. Their vast collection of papers at the National Library might be the most quoted in Australian literary historiography; they corresponded with so many of the writers of their time and, unlike some, preserved their letters.

Forty years ago, Vivian Smith edited a collection of their letters, focused on literary matters between 1915 and 1963 and deleting ‘[p]assages of a highly personal nature’ or ‘any references likely to cause offence’ (Smith x). Deborah Jordan’s new collection of their letters is very different in approach: intentionally personal, including only letters between them, and dating only from their courtship years between 1909 and 1914. After reading Smith’s collection, it’s a pleasurable shift to find them writing to each other in their twenties, idealistic and intense and still in formation. Jordan’s selection is from a transcription of all their letters to each other from 1909 to 1959, an Australian Research Council funded project from 2005 to 2007. Hopefully, for the benefit of scholarship, the full transcription will eventually be made available.

Nettie and Vance’s correspondence began in 1909 after Vance ‘took the risk to speak first to the young woman who was regularly studying near him’ in the State Library of Victoria (23). Nettie was completing her honours at the University of Melbourne; Vance was a Queenslander already trying to make his living by writing. Their attraction to each other is palpable from the first letters; in each other they found the intellectual and spiritual match they had been looking for. The development of their relationship is a subtle, gripping drama. I reached the eventual declaration of their love with a sense of relief and joy, even though I knew it had to come. The paradox of letters in conveying a relationship is that they are usually written when the correspondents are apart from each other; there are gaps when they are physically together—as Jordan warns us, ‘there is only a series of notes and brief letters to mark ecstatic trysts’ (13). Inevitably, then, there is a gap at the crucial moment. In the letter Vance sends to Nettie on 15 October 1910 they are only friends; the next letter, undated, has Vance declare, ‘Everything seems to be aflame with the miracle of it’, and finishes, ‘My love shall encompass you always’ (220).

Nettie and Vance’s letters are often about books; they read widely with passion and discernment, both classics and contemporary literature, from now-forgotten bestsellers to writers who have endured like George Bernard Shaw. It’s an interesting snapshot of a particular moment in English-speaking literature, before the Palmers’ contemporaries like Virginia Woolf, James Joyce, and D.H. Lawrence had made their impact.

To read this book is to witness history through particular eyes, giving a sense of living through the end of the Federation period in Australia to the brink of the Great War. Their references to contemporary events are suggestive even when fleeting, and the variety of settings and historical moments the Palmers intersect with over these five intense years is remarkable. Vance spends a period teaching on an outback station; although his remarks on Aboriginal Australians sound inappropriate today, he shows more compassion and insight than the prevailing culture. They are both in London at the peak of the suffragette protests; Vance has lunch with Vida Goldstein in 1911 and expresses a condescending appreciation of the 40,000 strong coronation march. Nettie studies in Germany in 1910 to 1911 and her experience of the country and its people would lead to her unease at their demonisation when war broke out a few years later. The letters also reveal a picture of mental illness and its treatment at the time, with Vance’s brother institutionalised after suffering a mental breakdown in 1913; Vance fears he will have to call the marriage off due to the stigma.

Although the letters reveal Nettie and Vance to be authentic and compassionate, their faults are also (intriguingly) on display, perhaps particularly a tendency to be superior or condescending. Although not wealthy, Nettie was educated and genteel; one day at the train station she encounters a single mother who has been working all day at a laundry. Nettie comments that she herself ‘only worked with her head’, and when the other woman says she envies that, Nettie tells her that if she was working with her head, she wouldn’t be free to think of her baby all day. Furthermore, Nettie had blisters from beating the carpets at her house yesterday when ‘the man didn’t come’; ‘I said that somehow I hadn’t been so bad-tempered after a few hours’ work of that kind as after some ordinary headwork’. Hearing more of the woman’s plight after that, Nettie confesses to Vance, ‘I think I understand one or two things that I didn’t before’ (139).

The scale of the Palmers’ papers and their lack of popular recognition today are perhaps two reasons no comprehensive biography of them has yet been published. Along with many essays on the couple, Jordan has also written a scholarly biography of Nettie’s formative years, Nettie Palmer: Search for an Aesthetic (1999). More recently, Sylvia Martin’s Ink in Her Veins: The Troubled Life of Aileen Palmer (2016) tells the remarkable life of the Palmers’ daughter. Loving Words maps another section of the Palmers’ lives in their own words while making apparent the vastness of the terrain.

Deborah Jordan has dedicated decades to researching the Palmers and her comprehensive knowledge of the couple illuminates her introduction, transitions, commentary, and curation. She shows a deft touch in bridging gaps to create a narrative and explaining opaque references without being intrusive. Just sometimes, jargon obscures rather than illuminates her subjects: ‘Nettie’s poems and articles can best be seen as part of an allusive, cross-cultural, intertextual, anti-colonial discursivity, where creative ideas in the forms of Imagism, Expressionism, Primitivism and especially Unanimisme discussed in Britain and Europe were transformed and re-shaped in Victoria’ (309). However, the overwhelming sense from the collection is Jordan’s deep commitment to understanding the Palmers and presenting them, accessibly, to a wider audience.

Nathan Hobby is writing a biography of Katharine Susannah Prichard for his PhD thesis at UWA. He is the author of the TAG Hungerford Award winning novel,The Fur, and blogs at nathanhobby.com.