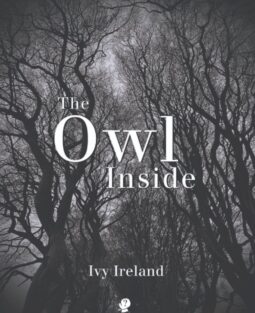 Review of ‘The Owl Inside’ by Ivy Ireland

In many cultures across the world, the owl is associated with witchcraft, death, evil spirits and bad luck. Harry Potter has reinforced the owl’s mystic image in recent times. Nonetheless, there are a few instances of positive association, in which the owl’s acute vision symbolises discernment and wisdom. Whether a symbol for good or evil, the owl fascinates the human imagination. Ivy Ireland seems to be saying that there is an owl inside all of us, in various ways, which creates unease about all that can’t be explained. In her latest collection, The Owl Inside, Ireland prods at the human yearning for the mysterious and the sublime.

To some extent, this volume is a tribute to the overwhelming and overpowering forces of the non-human world. The beauty of Ireland’s poetry can be seen in how she places the human and the non-human, the ordinary and the extraordinary, as mirror images reflecting each other’s troubled conditions. In so doing, Ireland crams an array of complex thoughts into each poem to help us see connections between the mundane and the ethereal, the idyllic and the grotesque.

The title poem, ‘The Owl Inside’ (11), illustrates Ireland’s intricate yoking of the disparate:

In fact, it was numinous: scorpion moon in a cloud ring,
bleeding out into the mottled sky like thoughts through an
empty evening. If no one else felt the connection: owl, bin, ring,
then the revelation is solely mine. And that is as it should be.
Afterwards, I stood statue still

The connection between ‘owl, bin, ring’ (respectively representing the uncanny, the mundane, and the sublime) is intriguing. The persona steps out to empty the bin at night in answer to an owl’s call in a neighbourhood bush. The moonlit night, with ‘scorpion moon in a cloud ring’, signifies both an astrological spectacle and a celestial wonder. Hence, the persona’s encounter with this eerie night is both empowering and overpowering, making them ‘[stand] statue still / in the small wood’. These lines illustrate how Ireland deftly charts the liminal spaces between the gothic and the romantic sublimes in this collection. The romantic sublime enthrals and empowers the beholder. The gothic sublime is an unsettling and overpowering encounter. In such poems as ‘The Lagan’ (35), ‘Spring in the Wicklow Mountains’ (37), ‘Spotted Pardalote’ (13), ‘Crossing the Sun’ (12), and ‘Sea Eagles’ (17) we see this crisscrossing of aesthetic sublimes, achieved through the connection between—or juxtaposing of—natural splendour, the mundane and the uncanny.

One thing that stands out in, or stands in the way of, Ireland’s aesthetic approach is her consistent trope of the mystical. Her background in magic (she once worked as a magician’s assistant) can be seen in the predominant use of arcane language and occult imagery across the volume. Is she playing a trick on the reader, as magicians do with their audience? Are these mystic allusions her way of unsettling the modern predisposition towards the empirical and the material? These are questions one needs to negotiate to enjoy this collection. For instance, lines such as ‘flayed frog’, ‘birds will eat birds / a macabre moment / which is […] / augury’ from ‘Dream Therapy’ (24) evoke a psychic ritual. In ‘Household Accounting’ (43), the poet wants us to see the ‘uncanny’ side of what could pass as ordinary incidents:

Four boys on four bikes,
fourth street of your walk,
fourth hour of the afternoon,
fourth day of the week.

While many may see this numerological occurrence as a happenstance, the persona hints at an ‘unheralded augury’.

In ‘How to Protect the Lungs’ (61), we see what appears as a biocentric protest giving way to mystical activities involving the owl alter ego.

Down at the oval there’s a ghost-dance or cargo-cult—
ascension by meditation […]
[…]
I gather with the rest of them on rooftops at dawn,
[…]
howling out the absurdity of all school bells now
[…]
There’s a netherworld waiting, just beyond
these prophetic dreams I’ve almost stopped mapping out.

The persona here can be imagined as an owl in physical or mystical flight to a ‘cargo-cult’ gathering. The arcane language in this poem, as in many others, however, reveals ecological concerns and eschatological anxieties. Concerns over ‘inhalation of ash’, ‘single-use plastic guilt’ and ‘drive-thru breakfast’ are expressed through such esoteric imagery as ‘cargo-cult / ascension’ and ‘666-Apocalypse’. Each of these ideas is a major topic that could occupy an entire poem. For Ireland, however, a single poem is a forest offering diverse experiences and multiple entry points all connected in a complex existential puzzle.

Another impressive achievement of The Owl Inside is how Ireland warns us about the increasing possibility of climate apocalypse without sounding sententious. Many contemporary poets have taken to artistic activism in response to climate change. The consequence is a flood of climate advocacy poems, some of which pay little attention to aesthetic originality. In this collection, Ireland has shown that it is possible to present ecological concerns in poetry without turning to superfluous news media clichés about pollution, global warming and melting ice. In ‘How We Will Live’ (20), Ireland inspires us to imagine climate instability by working out the details ourselves. Among other subjects she addresses, this poem encourages us to ‘[dissect] the glare of this early morning stormfront’, and to ‘balance these pitiless winds against impending calm’, and then reach our own conclusions based on our personal observations of the world. My favourite, ‘Spring in the Wicklow Mountains’ (37), puts us right in the scrubland of the Irish Wicklow Mountains, known for their ice age topography. In such short and simple lines as ‘in this druid’s oak / clear within / you are not now / what you were just yesterday’, Ireland reminds us of the eroding consequences of hostile times, such as those we live in.

Ivy Ireland certainly puts a lot of thought into each poem. Each line is meticulously composed to elicit deeper reflections on some of the nagging ecological problems and personal struggles we are facing in recent times. To enjoy what Ireland thinks about these issues, one will certainly not get away with a sloppy reading of The Owl Inside.

Jerome Masamaka is a poet and a creative writing PhD candidate at Murdoch University.