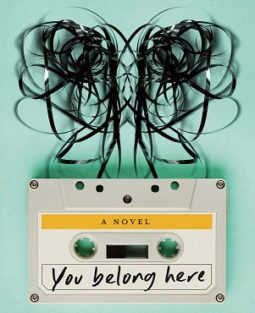 A Review of Laurie Steed’s ‘You Belong Here’

Flaws. We all have them but many of us are loathe to admit it. Instead we push them, inch by inch, under the cover of our strengths, seeking that perfect outer persona.

Too often in fiction are we presented with unreal characters: perfect specimens of humanity with perfect personalities and ideal bodies who achieve the ultimate goal—a happy ending. In You Belong Here there are no such glossy-magazine depictions of family life or the individual self. Instead everyone is flawed, and each character displays these imperfections gloriously, unashamedly and often in heart-rending detail.

The story follows Jen and Steven’s relationship, their marriage, then in turn their children’s growth and development into young adults and eventually adults; the rap sheet of imperfections growing ever longer. Steed begins with Jen, portraying her not as a perfect protagonist, fully in the throes of love and an adoring mother, but an anxious, emotionally vulnerable young woman who doesn’t slip soundly into romance, marriage and motherhood. Jen bumps and stumbles along each life event, making mistakes on the way. She has a selfish and brazen affair, which forms the basis of the breakdown of her marriage to Steven.

Even from the very start of the relationship, she’s uncertain and withdrawn:

‘He cuddled her, and she liked the way he gave in to the cuddle, hoping one day she could be like that, thoughts thrown out to the wind, eyes closed, feeling love, or something like it.’ (20)

Like an emotional baton relay, next it’s Steven’s determination to always be in control that opens the next crack in their almost ideal world. Jen’s unfaithfulness may have been the catalyst for the breakdown of their marriage, but it’s hurried on by Steven’s stubbornness to accept responsibility for a serious incident at work. His refusal to accept that he did anything wrong, to even believe that he might have got something wrong, costs him his job.

‘Phil had told Stephen to be humble, but for Stephen humility was best reserved for concession, or outright apology.’(30)

This is a pivotal moment in the story, not least because it’s so hard to like or sympathise with Steven, even before this misdemeanour. He’s cocky, arrogant and slyly controlling of his anxious wife. Although Jen has an affair, you feel almost like you can’t blame her. And that’s another trick that Steed has up his sleeve in this book: there are recognisable aspects of so much of life in the narrative and characters, to the point where You Belong Here really forces the reader to recognise and confront their own flaws. Or at the very least, to recognise aspects of flawed relationships, whether romantic or familial, that exist in our own lives.

The chain of imperfection continues through the Slater family, trickling down into the lives of Jen and Steven’s children; Alex, Jay, and Emily. It becomes a joyride of human error: Emily hides their father’s letters from Jay, Alex steals his brother’s girlfriend, Jay ends up in a psychiatric hospital. It’s both fascinating and admirable the way that Steed moves seamlessly (but with an understanding by the reader that it’s happening) from eldest to youngest, parent to child, focusing on the lives of each individual while still maintaining that essence of a family nucleus. That takes skill, and even more so to tell this story in a way that is both thought-provoking and page-turning all at once.

You Belong Here is reality at its most bare. Relationships are cracked open as if someone has put two hands in the ribs of each character and pulled them apart to expose the raw inside. People hurt each other, hinder each other, restrict each other. They’re mean, they’re nasty, love turns to hate turns to lust without any semblance of compassion or consideration. But among all this, the story isn’t difficult to read, or unpleasant or hard work, because there’s always a subtle hint that things will come right in the end—because it’s family and you can’t escape that bond no matter how hard you try.

It’s a free-flowing, empathetic look at the best and worst of human nature, and how we navigate those aspects of humanity when it’s people that we are bound to by blood. Read it and weep for the broken, hanging-by-a-thread Slater family and for yourself, because we are just as messed up as they are.

Jen is a writer and journalist based in Perth. She lived and worked in Edinburgh, Scotland for ten years and has written for a number of UK newspapers and magazines including The List, The Guardian and The Scotsman. Previously Arts and Events Editor of Scoop Events, she now works in the marketing team at Fremantle Press.