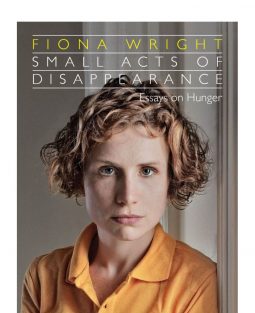 A Review of Fiona Wright’s ‘Small Acts of Disappearance: Essays on Hunger’

Fiona Wright is a successful poet and writer who lives with an eating disorder. Yes, this book may not sound like a barrel of laughs, and at times it isn’t. But it is a carefully crafted selection of essays about Wright’s life and how food, nourishment, or the lack of it, aids her work by making her sharper, whilst on the flip side making things ever so much worse.

Each chapter begins with ‘In’. ‘In Colombo’, ‘In Miniature’, ‘In Books’, are just some of the chapter titles and each chronicles a crucial point in Wright’s life. This isn’t a book solely about anorexia; it’s a collection of essays by a writer who suffers from it. There is no self-help to be found here, just a detailed observance into a disease, which is shrouded with shame and feels like a secret society.

I am lucky. I have not suffered from any major eating disorder, or known anyone who has struggled with this disease. It is a strange, secret world I’ve never felt the need to look into. Wright’s essays enlightened me to the sheer isolation anorexia sufferers feel. One major realisation was that most social interactions and rituals centre around food; brunch, lazy Sunday breakfasts, birthday parties, weddings and funerals. How detached Wright seems to feel when she writes about the dread of partaking in these rituals without being singled out as the one not eating, or the one bringing her own steamed veggies to a BBQ, is quite heart-breaking to read.

However, you have to be incredibly strong to stay hungry. I learnt that as your body becomes weaker and thinner, your mind grows stronger. The mental strength needed to starve yourself makes you alert, strong and sharp. According to Wright’s essays, it comes from our early evolutionary days where a weak human was highly likely to be hunted or murdered; therefore hunger makes you aware of your surroundings with a keener eye and ear.

The last third of the book refers heavily to important books Wright read during her recoveries. These books thread into her own life with correlations found in all of them. There are wonderful passages to read from Cloudstreet, The Blue Bird Café, and For Love Alone. The most interesting references came from John Berryman’s Recovery/Delusions, an unfinished work by an alcoholic poet about group therapy: “Find out what the hell is wrong and fix it”, (John Berryman’s Recovery/Delusions).

Wright often refers to herself as gauche, graceless and socially awkward, which is contrary to her writing style; her writing is poised, graceful, and direct with carefully chosen words. Each word is valuable and sat perfectly in its place on the page. No excess. No ‘fat’.

I thought this book would have little to give me, but a nerve was pricked when I thought back to four years ago when my heart was broken. For three months I shut down, and it felt good to feel the pain of hunger, it felt good to be thinner. Luckily the sadness left me and my appetite returned. Small Acts Of Disappearance is a confronting, intimate, precise, measured, exposing and brave selection of essays about a writer ‘fighting the good fight’. It’s not self-wallowing, and it doesn’t sway one way or the other; it’s simply a selection of incredibly well written essays about hunger and life as a writer.

Jo-Ann came to Sydney from England ten years ago and is a writer and book blogger at ‘Duffythewriter’.