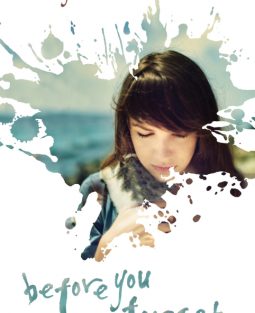 A Review of Julia Lawrinson’s ‘Before You Forget’

It’s easy to forget things: your appointments, your keys, or your umbrella on that particularly rainy day. But what happens when you start forgetting the big things, like parts of your life and the people in it? Julia Lawrinson’s new fictional Young Adult novel, Before You Forget is a consideration of early-onset Alzheimer’s disease—a condition, commonly linked to the elderly, affecting people in their 30s and 40s. This is a revelation of how one teenager bears life’s unexpected.

The book begins with Simon, seventeen-year-old Amelia’s father, waking the household. He’s confused. It’s three o’clock in the morning and he believes he should be at work. Simon doesn’t know where he is or what’s going on: “Don’t tell me what to do! You get me up and I’m supposed to go to work and you pretend everything’s all right and I know you are lying” (2). Lisa, Amelia’s mother, manages to coax Simon back to bed. But the next day, when Simon remembers nothing of his rant, Amelia begins to wonder what’s wrong with her father. “It’s something Mum. He’s not right. Something’s not right” (4).

Set in and around Fremantle, Amelia reminisces of times shared throughout her life with her father. Simon is encouraging of Amelia’s artwork and an active parent involved in her primary school as the chess coach. Amelia describes him as someone who used to know everyone. She recollects herself and her father at Bathers Beach almost as validation—if he can recall this memory, then he is the man from that day. He is her father. “Some days we’d walk up to the Mole, where pelicans bigger than me waited for the fisherman to throw them some bait. Apparently I once called them pecalids, and Dad has called them that ever since” (31). This is the memory Amelia repeatedly turns to. This is the memory she will remember her father being-her-father the most.

The story builds on Simon’s violent mood swings, his forgetfulness of familiar places and his odd handouts of money to an unknown man he repeatedly brings home. After Simon’s diagnosis, Father-Daughter roles are almost reversed: Amelia is asked on occasion by her mother to babysit her father, and Simon continues to behave like an impatient teenager. Because of the disease, Simon can’t control himself. He’s impulsive, has no understanding of his actions affecting other people and requires the kind of attention a toddler does.

Simon’s condition leads Amelia to find the problems of her peers melodramatic. Amelia can’t understand her best friend Gemma’s self-image issues, moody behaviour and obsession with scouring Tumblr looking at bony girls with eating disorders. The problems teenagers face become irrelevant to Amelia because of Simon’s condition; she is forced to grow up.

Amelia must also adjust to her parents’ new relationship, where her mother speaks differently to her father: “she sounds kinder, speaks slower” (92) and they sleep in different beds. Soon, strangers are more present in Amelia’s house than her mother, carers that Simon neither wants nor likes. All except one, Rosetta, “who looks like she’s walked out of a day spa” (166). Simon inappropriately flirts with Rosetta in front of Amelia and her mother. With the unfamiliar faces and changing household dynamics, Amelia starts avoiding going home, taking refuge at her friend Poppy’s house.

Lawrinson subtly writes around how the other members of the family deal with Simon’s disease, with good reason: protagonist Amelia is the focal point. She copes with her father’s decline by finding solace in her artwork and obsessing over 9/11 videos on YouTube. Amelia’s fascination with the terror attacks on the Twin Towers is displayed throughout the book, “it’s not the sort of thing you expect to happen, and it shocks you out of the half-awakeness that passes as existence most of the time. Things can happen all of a sudden, and nothing can ever be the same again” (11). Amelia feels about the World Trade Centre the way she feels about her father’s diagnosis: it came from nowhere and it’s out of her control.

Through her connection to 9/11 and her father’s disease, Amelia exposes her true artistic abilities. She paints a portrait for her end of Year Twelve art exhibition of a moment shared with her father, leading her to win the approval she so desperately seeks from art teacher Ms M and keep her father’s memory alive. “Their lives are gone, but people are now dedicating their lives so that we remember them. So we don’t forget what an awful thing it was that happened. The way I’ll want to make sure even if Dad forgets his life, forgets who we are, we won’t forget him” (193).

And although the major theme in Before You Forget is based on early-onset Alzheimer’s, there are many fitting storylines for an adolescent readership, providing relief to the book’s tragic topic: a love interest for Amelia in the cute boy next door and a disobedient Jack Russell called Hecta. Lawrinson captures the essence of youth in Amelia. Her character is unfalteringly comical, witty and emotionally charged with every page turn. Her relatable qualities will be a big hit among young readers. Before You Forget does not stray from Lawrinson’s other work, which boasts her usual style of engrossing prose and examination of major themes. But this novel, I feel, has been her biggest challenge yet: incorporating her and her teenage daughter’s heartbreakingly personal story of having lived and in a sense lost her husband and her daughter’s father to early-onset Alzheimer’s. Lawrinson pours first-hand knowledge into this novel about family, friendship and loss.

Joanne Morrell is a recent graduate from Edith Cowan University with a Bachelor Degree in Writing. Her work has been featured in Hubbub exhibition catalogue and Dircksey online magazine. She is an aspiring Children’s and Young Adult author and is an active member of the Society of Children’s Book Writers and Illustrators.