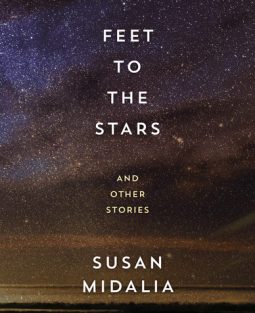 It’s the convention at a book launch for the author to begin by thanking the people who have helped bring his or her book into the world. But for me this is much more than mere convention, because I remain deeply grateful to UWA Publishing for having accepted all three of my short story collections, including this latest one, Feet to the Stars. In particular, I want to thank the Director, Terri-ann White, for her continuing faith in my writing, and for being a great champion of the short story genre, in a literary culture that often doesn’t take a writer seriously until she/he has produced a novel. I also want to thank the Publishing Officer at UWAP, Charlotte Guest, who I wasn’t able to acknowledge in my book because it was already being printed by the time she and I began working together. Charlotte is an absolute treasure as a publicist: she’s admirably professional and hardworking, as well as creative in her efforts to promote books, including my own.

I also want to thank Kate Pickard and Nicole Vankan from UWAP, for helping with the sale of my book tonight, and to all the staff at the Lawrence Wilson Gallery for providing this elegant and spacious venue for the launch.

And of course, thank you all — family, friends, writing colleagues, students — for turning up to celebrate. In particular, thanks to my mother and her friends for making the trek from the bush. Special thanks to my two sons — my two best creations — for flying in from over east. My older son Jack, and his partner Caris, have come from my second favourite Australian city, Melbourne, and my younger son Harry has come from that hotbed of hypocrisy and sense of entitlement commonly known as Canberra. But the biggest, richest, most expansive, immeasurable thanks go to my husband Dan. For his unwavering emotional support, and for reading my work intelligently and meticulously. For telling me what works, what doesn’t, and why. And, very importantly, because he goes to work from Monday to Friday so that I can enjoy the luxury of sitting at my desk every day, doing one of the things I love most in the world. Writing. Turning black marks on a white page or screen into something to believe in. I couldn’t have produced one collection of stories, let alone three, without Dan’s magnificent help. So if there are any women here tonight looking for someone to finance their writing career, I need to tell you that Dan is well and truly off limits.

So that’s the thanks, all of them sincerely meant. Now I’d like to share with you a few advance reviews of my book; one official, and three unofficial. The official review was by William Yeoman, the books editor at the West Australian newspaper, and I couldn’t have asked for a more thoughtful, sensitive and beautifully written response to my stories. The three unofficial reviews, however, from members of my family, all expressed serious misgivings. My mother, to whom this book is lovingly dedicated, was highly disconcerted by some of the language. By which she meant, of course, the bad language, the swear words, the vulgarisms. I had to reassure her that my characters’ use of bad language was absolutely no reflection on her parenting skills. The second review came from my younger son Harry, who leaned across the table in a Canberra restaurant and told me, rather sternly, that I had references to sex in every single story. Now initially, I was gobsmacked. Incredulous. I thought he was talking rubbish. But in fact, when I later checked the table of contents in my book I thought… hhmm… he’s absolutely right. So thank you, Harry, for reminding me that writing is an unconscious, as well as a conscious, process. But I also want to say here, by way of an aside, that I do take writing about sex very seriously, given that it’s one of life’s more joyful, affirming, problematic and sometimes just plain ludicrous experiences. The third and final family review came from my husband Dan, who simply told me that I had to stop killing off husbands in my stories.

So there you have my book, according to my family: it contains adult themes, coarse language and sexual references. And with that in mind, I thought I could turn the book into a TV miniseries and pitch it to the ABC. And then I thought: I’d better get in very quickly, while there is still an ABC in existence.

Thank you for laughing at my joke. But of course, the Federal Government’s recent bullying of the ABC is no laughing matter. It’s a frightening and indefensible attempt to shut down political debate and dissent, to impose a form of censorship on the Australian people. Now I told myself that I wouldn’t go on a political rant this evening, but I do want to say a few words, in relation to my book, about what’s been happening in and to this country. A few of the stories in Feet to the Stars were written in response to the morally impoverished and often irrational political discourse and policies that abound in contemporary Australia. So in this book you’ll find stories that raise questions about migrant experience, the critical global problems of refugees and climate change, and which deal with the lack of respect in our right-wing political culture for any person who isn’t white, male, heterosexual and economically privileged. Now I know that writers of fiction shouldn’t bludgeon readers with political outrage, as I’ve taken the opportunity to do just now. But I have tried to write some more explicitly political stories as a way of demonstrating the value of respect for, and kindness towards, other people, particularly the more vulnerable and powerless. More generally, my stories are concerned with what Lekkie, in her launch speech, so eloquently called ‘the ethics of encounter’: how we treat one another in our daily lives, and how much this can matter. Now I’m not naïve enough to think that just being kind to one another is going to solve deeply entrenched global problems: war, poverty, corruption in government and business, widespread social injustice. But I do believe that a generous, compassionate heart and the capacity for rational thinking are at least good starting points, the qualities that are needed to sustain a civilised community and society.

Finally, I’d like to say a few words about the business of writing short stories. Firstly, it’s a great challenge to undertake this form of writing, because you have to satisfy two competing requirements: a short story needs to be brief but must also be resonant. It has to be economical while also creating the illusion of something larger beyond the relatively few words on the page. As the writer Barbara Kingsolver observed, a memorable short story is ‘the successful execution of truths in very tight spaces.’ In fact — and my apologies for those who’ve already heard this joke — I myself am the living embodiment of a short story: I am inescapably short but strive not to be superficial.

I also love writing short stories because they pay tribute to the importance of a moment, or moments, in time. Think of some of the most important moments in your life. The first time you knew, with exhilarating certainty, that you were crazily in love. The precise moment when you decided to quit your job, get married, or leave a marriage. That moment when you put out the rubbish bin, looked up at the sky and became entranced by a luminous orange moon. That moment when you just managed to resist throwing a cream pie at Tony Abbott. Joe Hockey. Scott Morrison. Christopher Pyne. George Brandis. How long do I have for this speech? OK, to continue: Moments can be revelatory, epiphanic, transforming. Or they can be anti-climactic, even deeply disillusioning. Moments can damage or console us; rescue, even heal us, and they often endure, haunting us for years. There are also those exceptional moments that exceed language itself. One of my favourite descriptions of the inadequacy of language comes — very aptly — from the famous mime artist, Marcel Marceau, who wrote: ‘Do not the most moving moments of our lives find us all without words?’

In closing: a few words about the choice of title for this collection, Feet to the Stars. It’s taken from a poem by Sylvia Plath, called ‘You’re.’ It’s an unusual poem for Plath, because it’s not about suicide, depression or masculine betrayal, but a celebration of the physical energy and sense of uninhibited bodily pleasure that can be the special province of young children. The poem begins thus, with a wonderful image of a child doing a handstand: ‘You’re clownlike. Happiest on your hands, feet to the stars.’ So amid all the reasons for melancholy, cynicism and despair — and heaven knows, there are so many of them in our global world — I have also written about hope, and the importance of remembering that for some of us, at least, the lucky ones, it’s simply and miraculously, a privilege to be alive.

Susan’s collection, Feet to the Stars, is available from UWA Publishing.