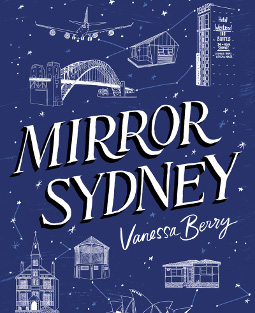 A Review of ‘Mirror Sydney: An Atlas of Reflections’ by Vanessa Berry

Professionals in city planning say placemaking is about creating the vernacular of a place, embedding an identity in it by celebrating those often intangible elements, such as beauty, grittiness, heritage, or idiosyncrasy, that make it unique. Vanessa Berry’s Mirror Sydney is an exploration of Australia’s biggest eastern metropolis that draws out these elements and holds them up to the light. In Sydney’s theme park wastelands, traffic-choked highways and forgotten shopping arcades, Berry dusts off connections to past civic ambitions and once-upon-a-time projects and tells us the stories that reveal a more complex identity for them.

Mirror Sydney is a love letter to the city’s false starts and accidental landmarks. The book’s collection of stories, sketches and hand-drawn maps detail not the iconic Harbour Bridge or Opera House but the overlooked and the odd, the city’s now-forgotten Monorail (103); its ‘understudy’ harbour bridge at Warwick Farm (239); Fiona, Goddess of Used Cars on Parramatta Road (78); and the Royal Botanical Garden’s Wollemi pine (237), a wishing tree with links to a prehistoric world.

These stories present a city rewritten, capturing ambience and atmosphere, and imbuing location with memory and symbolism. The chapter on the Sydney underground, for instance, opens a portal to a secret subterranean world of caves and tunnels as infiltrated by the Cave Clan, underground adventurers whose tags can still be found on manholes and grates throughout the city. The Cave Clan’s ‘Sprawling Manifesto of the Art of Drain Exploring’ lauds ‘the acoustics, the wildlife, the things we find, the places we come up, the comments on the walls, the maze-like quality; the sneaky, sly subversiveness of being under’ (169).

Protest graffiti, memorial stores, floating restaurants. By gazetting the distinctive, messy, hodgepodge places to which humans are drawn, Berry chronicles an overlooked Sydney that also tells the stories of who we are, who we were and what we tend to care about. The Domain Express Footway explores relics of a never-realised 1970s plan for an efficient citywide network of underground expressways and car parks. Millers Point: Before and After describes the built history of a neighbourhood long fought for and on the brink of disappearance, its terrace houses and eccentric apartment blocks threatened by profit and property development.

Initially a series of blogs, Berry’s personal musings and experiences have come to the page spun through the histories of the places she presents. Her maps and illustrations—interspersed throughout the book in groupings which include designations such as Sydney Elephants, Lost Property on Sydney Trains, and Sydney Mystery Structures—feel personal and tender, curating the city as an urban wonderland. It is an approach I would want her to take in my own city: making magic out of those landmarks I have passed all my life.

Despite the seeming futility of holding onto these eccentric structures and hidden places, one wonders whether we perhaps need observers like Berry to effect some sort of preservation in a constantly-changing city, even if only in personal anecdotes. By her cataloguing of it, the everyday of Sydney is distinguished with the gift of history. And Berry’s stories suggest in the author a deep sense of belonging. This is a book for someone who knows Sydney well, who could find similar delight in its back stories and revelations for nearly forgotten places. But the book also offers a new way of looking at any city: with a playful curiosity, and a willingness for wonder—or what Berry terms in her author note ‘the radical potential of taking notice’. Mirror Sydney’s ruins and mysteries offer different versions of places we might know well, places that are compass points within the city’s psyche; places we would otherwise pass by without a second glance.

In her preface, Berry writes of the ‘undercurrents, and weird places’ that form an alternative city, ‘a mirror, or shadow Sydney’. ‘To write of a city’s shadows and undercurrents is to use these details and atmospheres as thresholds, opening up the repository that is stored beyond them’, argues Berry. Perhaps it is some of those same details and atmospheres, that enigma or resonance, that placemakers are referring to when they talk about curating successful public spaces, places with identity, history and distinctiveness.

Kim is a writer working in the arts. She has worked regionally as a journalist and currently writes for in-house publications and projects.